Institute of Arctic and Alpine Research/Geological Sciences, University of Colorado-Boulder

It was a surreal moment: gliding through the glassy, ice-cold waters of Davis Strait in a small wooden freighter canoe, passing by ornately sculpted icebergs and billion-year-old fiord cliffs, and our Inuit guide, Gordie, focusing his rifle on the curious seal whose head had popped up in the distance. Oh, and Ke$ha playing loudly through the stereo. Working on Baffin Island always involves the unexpected, whether through experiencing the unique blend of traditional and modern cultures in remote Inuit communities, facing the challenges of backcountry travel in a harsh Arctic landscape, or adapting research plans as a result of unreliable infrastructure and tricky logistics on the remote island.

Baffin Island is located just west of Greenland and is the largest island (at a bit bigger than California) in the Canadian Arctic Archipelago. Glaciers outnumber people in this part of the Canadian Arctic, and eastern Baffin is home to spectacularly sheer peaks and dramatic fiords sculpted by ice over the last ~2.5 million years. It is here that my PhD research has taken me for the last three summers of fieldwork in order to study Arctic paleoclimate (climate of the past) and glacial history. 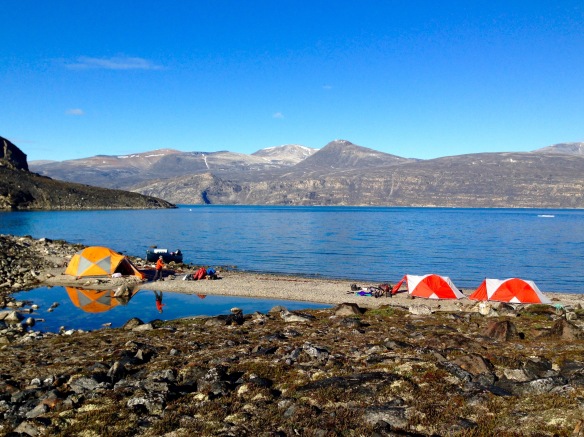 Temperature changes in the Arctic have been about 3-4 times larger—for both warming and cooling events—than the rest of the Northern Hemisphere during the last 3 million years. This is primarily a result of positive feedback mechanisms related to changes in sea ice, snow cover, and glacier extent, and in turn, this so-called Arctic amplification influences the climate system globally. Indeed, modern anthropogenic (human-caused) warming has been much more extreme in the Arctic—about 2-3ºC compared to the global average of 0.6ºC since 1970. We know the North is warming, and receding glaciers are the canary in the coalmine giving us visual evidence of this warming; but why do we care about what the climate and glaciers did in the past?

Reconstructions of past climate help us to understand how the climate system behaves in the absence of human influence, which in turn allows us to develop a baseline against which to compare anthropogenic warming. It provides a sort of guide for predicting how various parts of the Earth system—from glaciers to forests to ocean circulation—might change as a result of future warming, based on how they have changed in the past. Paleoclimate datasets also serve as testing grounds for the climate models used to forecast future trends. I am particularly interested in the relatively subtle—but still consequential—climate changes of the Holocene, the current interglacial (relatively warm period) spanning the last ~12,000 years. Baffin Island is an ideal location for studying Holocene climate, as its multitude of small ice caps and glaciers have responded sensitively to temperature fluctuations on timescales of decades to millennia. 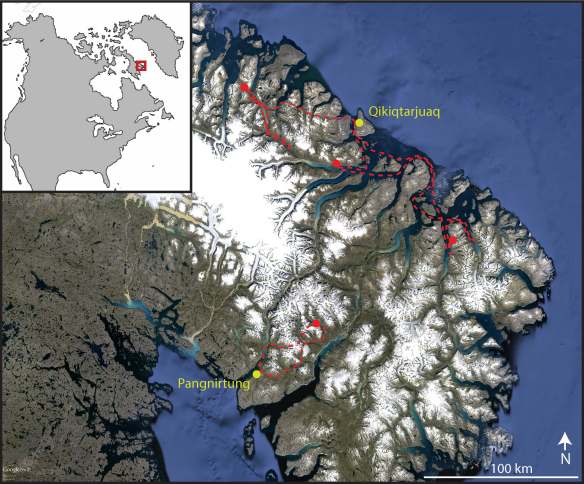 My thesis project involves collecting rock samples from glacier moraines—arc-shaped ridges that glaciers deposit while at their maximum extent—and determining the age of those deposits to reconstruct glacier activity. A relatively new technique called cosmogenic radionuclide dating allows us to determine how long a rock has been exposed at the surface of the Earth, via rare isotopes (e.g., 10Be) that are produced in situ as a result of cosmic rays bombarding the silicon and oxygen in that rock’s surface. By isolating and measuring 10Be, we can estimate when a glacier was extended to the location of the moraine, and thereby make inferences about climate at the time. Another part of my thesis complements this effort through the collection and analysis of glacial lake sediments to derive a continuous glacial history based on the character of that sediment through time (think tree rings, but instead we’re looking at layers of mud). Both of these projects involve accessing remote glaciated landscapes on Baffin Island with the equipment to collect samples and safely camp in this stunningly beautiful setting. 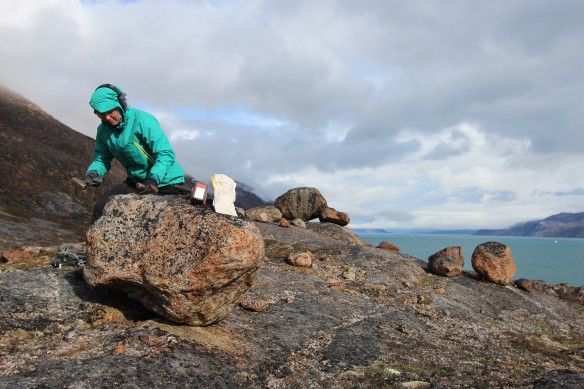 This August, I headed north to Baffin for my third summer of fieldwork with my advisor, a fellow CU PhD student, and two other researchers. Our work was initially stymied by a series of bad weather systems keeping our helicopter stuck farther north. After a week of waiting in an isolated one-room cabin, our team decided to instead go out by boat under the guidance of Gordie, a local hunter/fisherman. Despite encountering some unexpectedly exciting ocean swells and a too-close-for-comfort polar bear, we were able to successfully sample two excellent moraine complexes and make it back to the town of Qikiqtarjuaq by the time our helicopter arrived. In the next week, we camped in a remote valley off of Narpaing Fiord and sampled fervently to make up for lost time. We visited and collected samples from six moraine complexes in total, all of which appeared to be related to brief cold episodes during the as-yet poorly understood Early Holocene.

The journey did not end there. Our final objective was to collect lake sediment cores from a glacial lake about 50 km from the community of Pangnirtung, using a small inflatable boat, a simple rope-deployed coring system, and a whole lot of manual labor. After further weather delays and unfavorable sea ice conditions preventing boat travel, we were dropped by helicopter for a whirlwind two-day excursion to a truly spectacular glacial valley. Fellow PhD student Simon Pendleton and I worked to securely anchor our boat in 70-meter-deep water and successfully retrieved multiple sediment cores, whose laminations hold the key to understanding past glacial erosion on a season-by-season basis. 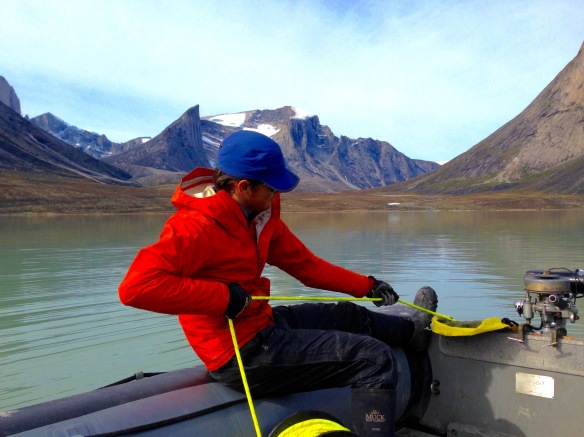 Four flights and several customs/security hiccups later, we were back in Boulder just 9 hours before our first class of the semester. As always, Baffin fieldwork was an all-consuming experience of beauty, challenge, and reward. We are greatly indebted to the Inuit who have graciously welcomed us to their land and facilitated our work there, along with the countless other individuals and organizations who support us on these expeditions (NSF, National Geographic, the CU Graduate School, and INSTAAR, to name a few). Now it’s time to hunker down in the lab and begin processing all of the rock and mud I brought home; but throughout the year, our experiences on Baffin continue to inspire and inform my work. And with each sample, we are slowly putting together the story of past climate in the North so that we might know a little more about what the future looks like.